Cy Twombly at the MUMOK 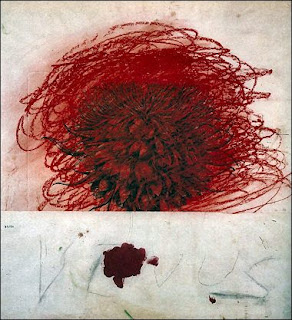 Venus by Cy Twombly, (above) 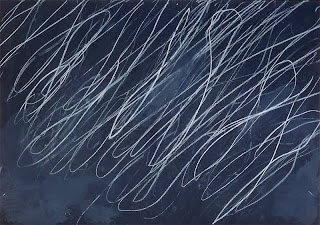 Untitled by Cy Twombly (above)
Our last stop during Vienna's Long Night of Museums was the Museum Moderner Kunst (MUMOK). It was about the middle of the night, and we ambled through the museum trying to take in as much as we could in our tired states. My primary memories are of the Cy Twombly Retrospective, "Sensations of the Moment." Twombly's mix of paint, drawn scribbles, and scrawled texts are at times child-like, at times allegorical, and always expressive. 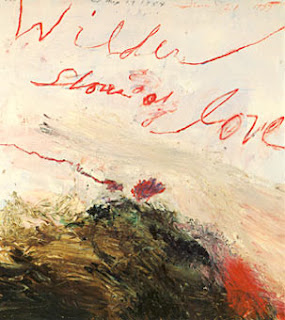 Wilder Shores of Love by Cy Twombly (above)
Posted by Sonja at 8:16 PM No comments:

Egon Schiele and the Leopold Museum

The Leopold Museum by day: 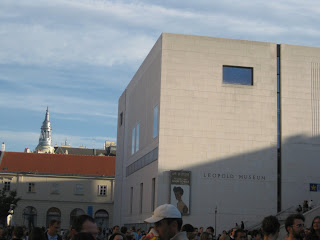 The Leopold Museum lit at night (by the same light designers who do Pittsburgh's Festival of Lights, lighting building facades throughout the city) : 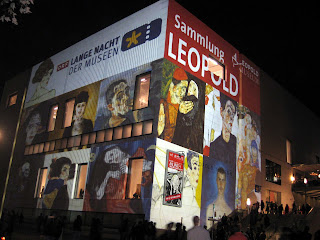 Schiele, whose works dominate this museum, fulfills the stereotype of an artist who lived an extreme life. He was arrested for “immorality and seduction” and painted throughout his two-week imprisonment. He died of the Spanish Flu at the age of twenty-eight after creating more than 3,000 works of art over his young life. 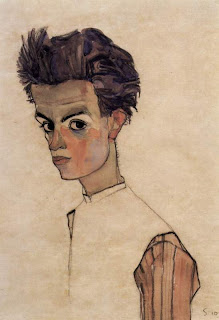 Self-portrait by Egon Schiele (above)

The Leopold Museum includes an interesting gallery called the “Psychoanalysis Room.” The psychologist Sigmund Freud, also from Vienna, influenced the artistic themes of his contemporaries. Freud’s themes of dreams, sexuality, the unconscious and introspection are very present in the work of Egon Schiele and Gustav Klimt, among other artists of his time. It is wonderful to imagine Freud, Schiele, and Klimt, all living there in Vienna at the turn of the century. Klimt had even painted one of Freud's patients. 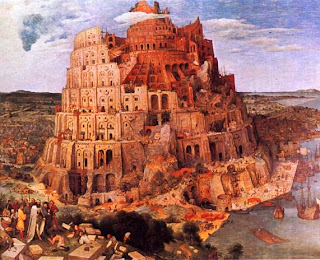 Tower of Babel by Pieter Bruegel the Elder, 1563, oil on panel, on display at the Kuntshistoriches Museum in Vienna, Austria (above)
The second museum we attended during the Long Night of Museums in Vienna was the Kuntshistoriches Museum. Emperor Franz Joseph I had this impressive museum built to house artistic treasures collected by the Hapsburgs. The museum includes Egyptian, Greek and Roman antiquities, sculpture and decorative arts, and a picture gallery that includes, most notably, Bruegel's painting of the Tower of Babel.
At the museum, my husband and I were charmed by this Egyptian ceramic hippo: 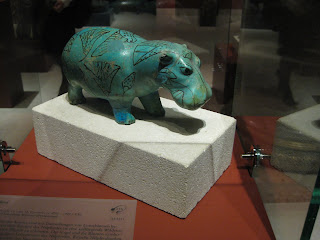 It was made in Egypt around 2000 BC. The hunting of hippos was meant to symbolize religious power, so this blue-glazed ceramic hippo was a prestigious possession. The piece was titled Nilpferd (which is German for hippo). There is a similar blue hippo at the Metropolitan Museum in New York.

Below are a few more photos I took within the museum (no flash of course!): 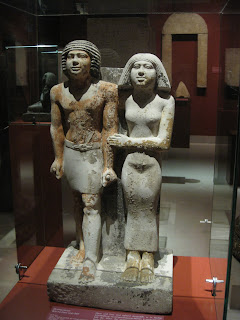 Ancient Egyptian sculpture of a couple (above) 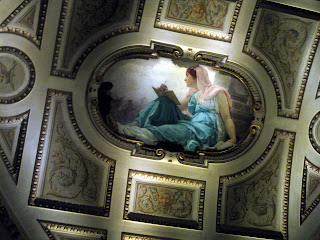 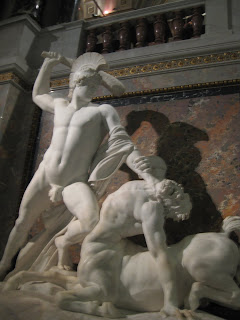 Sculpture of Theseus slaying a centaur (above) 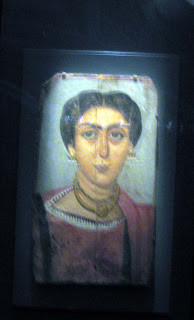 Ancient Roman mummy painting, around 2000 years old (above)
Posted by Sonja at 6:59 PM No comments: 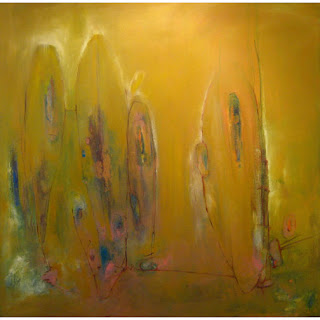 Chancing the Counter Balance, oil painting by Pittsburgh artist Joshua Hogan (above)
Joshua Hogan, contemporary abstract painter, has a two-person show with glass artist Adam Kenney on now at Boxheart Gallery in Bloomfield that I am very eager to see. The show is called Diad and the gallery's web site hints at a colorful, lovely show.
Hogan's paintings are always both beautiful and intelligent, using color and subtle forms to evoke emotions and ideas. He is an excellent example of how abstract painting continues to be contemporary.
You can see more of Hogan's work on his web site here:
http://www.joshuahogan.com/ or see his paintings in person at Boxheart Gallery. Perhaps I will see you there! (Show closes November 14, so I just have a few weeks left to go see it!) Note - Joshua Hogan also has two paintings on display as part of the soulpurpose show at 709 Penn Gallery, including the one pictured at the top of this post.
Posted by Sonja at 12:27 PM 1 comment: 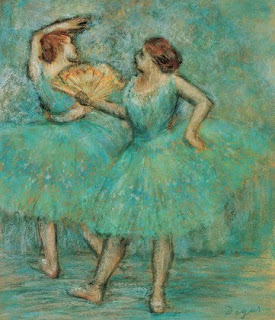 Two Dancers by Edgar Degas, pastel on paper (above), on display at the Albertina Museum
On October 3, we joined the crowds of enthusiastic museum-goers for the Lange Nacht Der Museen  (Long Night of Museums).  650 art venues throughout Austria stayed open until 1:00 a.m., and we saw as much art as we could see in one night.  I would describe the experience as being absolutely blasted by art. It was an overload of the senses, and we ended up staggering about in a blissfully zombified stuper from soaking in so much culture in a single night.  The crowds were enthusiastic and diverse... It was quite a party!
The first museum we hit was the Albertina, where we saw an exhibit of Impressionism called Painting Light.  Here is a link to the Albertina's web site where you can view select images from the exhibit: Painting Light
Posted by Sonja at 7:52 AM No comments: 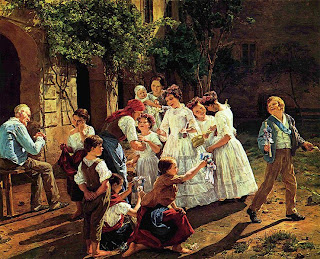 In addition to the glorious permanent collection of the Belvedere in Vienna, we enjoyed seeing an impressive special exhibit there, too-- the Ferdinand Georg Waldmüller Retrospective.
I was not familiar with Waldmüller before, but I instantly admired his paintings on first sight. The retrospective featured around 120 of his realist paintings, including portraits, landscapes, and scenes of everyday rural life in the changing society of Austria during the mid-1800s. Waldmüller influenced the later Pre-Raphaelite painters of England who favored Waldmüller's spontaneous painting methods and careful observation of nature.

My favorite piece in the exhibit was this portrait that was also selected as one of the two poster images advertising the show throughout Vienna: 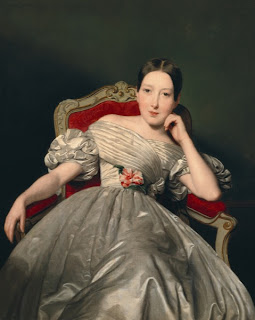 The young woman's slouching pose is very informal compared to the postured poses of the rest of Waldmüller's commissioned portraits. Although her pose may have been a flagrant disregard for the very stiff conventional manners of her time, the more natural pose and direct, thoughtful gaze makes her absolutely alive.

The Belvedere and Gustav Klimt 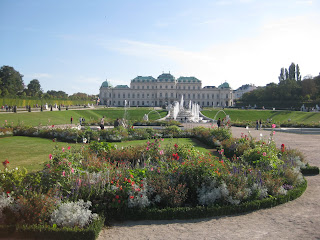 The Belvedere in Vienna, Austria (above)

Just back from the art adventure of a lifetime, in celebration of our wedding anniversary. First stop: The Belvedere in Vienna, Austria.

Here lives the largest collection of paintings by the Viennese artist, Gustav Klimt, including one of the most romantic paintings ever created-- Klimt's sparkling gold masterpiece, The Kiss. 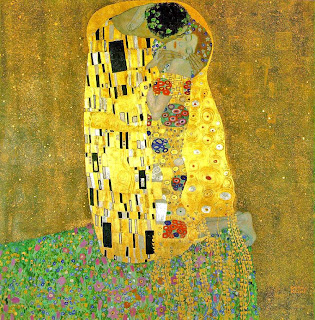 The Kiss by Gustav Klimt (above)

The Belvedere is an incredibly beautiful place— Two art-filled palaces with an opulent garden in-between with flowers, fountains, and statues including several sphinxes. 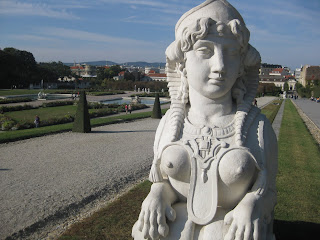 Here is a beautifully designed web site all about the artist Gustav Klimt that features more of his masterpieces: iklimt
Posted by Sonja at 11:06 AM 2 comments: