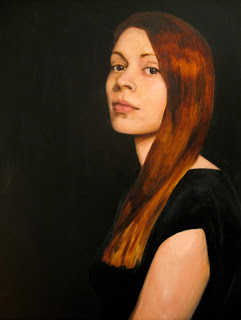 Unusual Happenstance by Matthew Buchholz
Yesterday we dropped into Wild Card to see Alternate Histories: Pittsburgh, a show featuring replicas of old posters, engravings, and historical photographs of Pittsburgh that have been doctored by artist/filmmaker Matthew Buchholz to include sea creatures, monsters, flying saucers, and other touches of science fiction. The combined images are seamless and clever.
We bought several posters. One called "Unusual Happenstance" is a map of Pittsburgh & Allegheny when they were two cities side by side, and a Godzilla monster roves in the distant cityscape. Another is of a flying saucer hovering over a now unrecognizable Fifth Avenue in the late 1800s, with horse-drawn carriages in the street. The third poster we bought is of a 1902 map of Pittsburgh with a sea monster's tentacles rising up from the Monongahela River, clutching a steamboat.
Read Marylnne Pitz's review of the show in the Pittsburgh Post Gazette here:
http://www.post-gazette.com/pg/10224/1079285-437.stm
Posted by Sonja at 8:37 AM No comments:

On Saturday we went to the I Made It! Market Mini @ Bike Pittsburgh Bike Fest and Swap.
I Made It! Market, organized by creative event planner Carrie Nardini, is a nomadic craft fair that takes place several times a year in various venues around the Burgh. Saturday's bike-themed mini market was in the most unusual place yet -- the empty Leslie Park Pool!

Somewhere above the deep end, I visited Kathryn Carr's booth and I was totally captivated by her beautiful paper cuttings. I bought several cards from her. I just love her work!

Kathryn's paper cuttings, or "scherenschnitte" (German for scissor cuts), are so charming and beautifully designed... 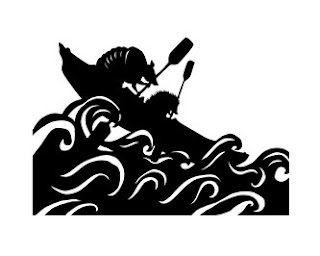 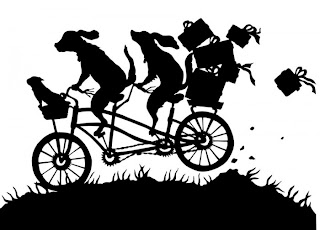 When I got home, I checked out Kathryn's web site, and I was delighted to discover her "little films" as well!

Kathryn Carr's art is available through her web site, http://www.gocarrgo.com/index.html, and at Wild Card in Lawrenceville.
Posted by Sonja at 7:10 PM 2 comments: 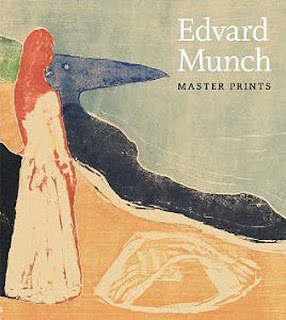 While in Washington, D.C. last weekend, we went to the National Gallery of Art, one of my favorite museums in the world. In the East Wing, we saw Edvard Munch: Master Prints. It was a small but wonderful exhibit of lithography, woodcut, and intaglio prints.
The exhibit included series that were variations pulled from the same plates. It was very interesting to see each image transform from print to print within a series. While each image changed in color, density, and technique, a somber mood permeated them all.
The exhibit will be up until October 31, 2010.
Posted by Sonja at 12:30 PM No comments:

Art critic for the Tribune Review, Kurt Shaw, wrote an excellent review of Vanessa German's solo show at 709 Penn Gallery, Tar Baby Jane and DooWop: Everything Useful for Your Modern Household. The article includes many insightful quotes from the artist herself-- absolutely inspiring!

Link to the article:
http://www.pittsburghlive.com/x/pittsburghtrib/ae/museums/s_693412.html
Posted by Sonja at 10:34 AM No comments:

The last time I had been to the Smithsonian American Art Museum, I had a group of students with me. We explored more of the folk art, unique crafts, and unusual sculptures such as Larry Fuente's Game Fish made from children's toys and game pieces. 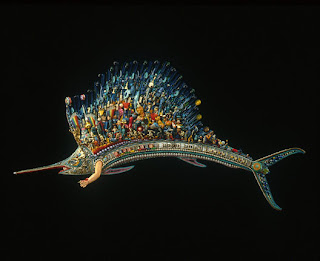 Among the most unusual art in the museum's collection is James Hampton's spectacular assemblage The Throne of the Third Heaven of the Nations' Millennium General Assembly. Interesting story - James Hampton was a janitor who created his assemblage in secret, working in a rented garage. He added to it every night over 14 years using discarded materials, mainly shiny pieces of foil. It was intended to become the centerpiece for a storefront ministry the artist hoped to open. The owner of the garage discovered Hampton's work after he had died. Imagine the garage owner's amazement when he opened the door and discovered this... 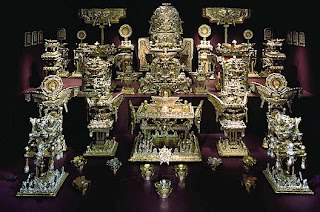 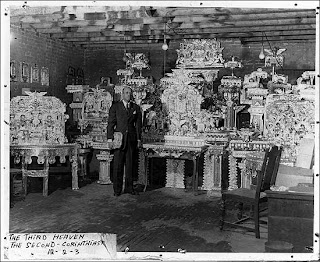 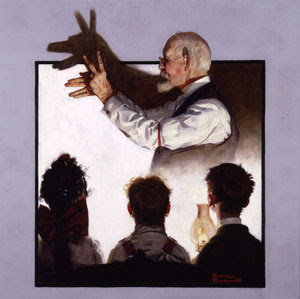 Saturday in Washington, D.C., we went to see Telling Stories: Norman Rockwell from the Collections of George Lucas and Steven Spielberg at the American Art Museum. It was an amazing exhibit!

Along with the exhibit, there was a film in which filmmakers Spielberg and Lucas talked about their fondness for Rockwell, their collections, and the influence Rockwell has had on them personally. There are several scenes in Spielberg's movies that are derived directly from Rockwell's paintings. Toward the beginning of Empire of the Sun, Jim's parents tuck him into bed, and the scene is composed like Rockwell's Freedom From Fear. The scene is a moment that Jim would long for when he becomes separated from his parents in Shanghai during WWII and finds himself interned at the Longhua Civilian Assembly Center. He carries this image with him. 
Rockwell's paintings often inspire a happiness to long for, or optimism that can tug at the heart-strings, making you want to smile or even cry. He was masterful at telling a story in a single image, so it is no wonder that movie-makers Spielberg and Lucas found inspiration in his work.

This exhibit was quite larger than I had expected, with many popular paintings as well as impressive, full-scale drawings that informed us of his meticulous process.

But go see the show in person for full impact. The paintings and drawings are large and wonderful. He was an expert painter and his use of color is terrific. It's an exhibit I'll remember for a long, long time.
Posted by Sonja at 6:33 AM No comments: