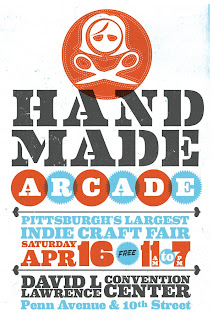 Congratulations to all involved in Handmade Arcade today! It was so great - the best one yet!!
Check out the crafters and their web sites through the HMA web site, here: http://www.handmadearcade.com/pages/application-2
Posted by Sonja at 9:19 PM No comments: 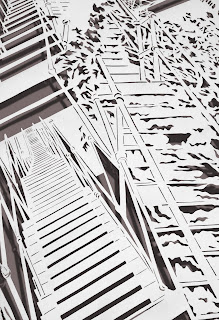 Paper Streets: Cut Paper Installations by Bovey Lee opens this Friday, April 15, at 709 Penn Gallery! (Opening reception 6-8pm, 709 Penn Avenue, in the heart of Pittsburgh's Cultural District)
To commemorate her 10th anniversary as a Pittsburgh resident, "Paper Streets" is a solo exhibition of new installations based on Bovey Lee's visual cataloging of the city and its region's topographical complexity.
The exhibition title comes from the so-called paper streets that are plunging staircases and walkways on maps considered as valid streets in Pittsburgh.
Lee is an amazing local artist whose intricate and imaginative work has won her numerous awards, including the prestegious Pollock-Krasner award in recent years, and her work is exhibited internationally.
There was just an article about her work in the Huffington Post this past Thursday, featuring works she created in 2008-2009 that are relevant to Japan's current crisis. Check out the article and those works here: link
See you at the opening on Friday!
Posted by Sonja at 10:18 AM No comments: