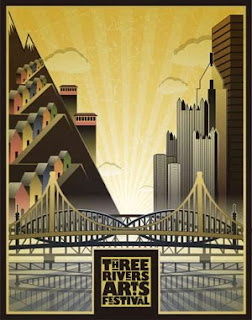 Waking Up to the Arts by Stephen Haynes, grand prize poster contest winner for the 51st Three Rivers Arts Festival (above)


The Three Rivers Arts Festival starts 1 week from today on Friday, June 4! The Festival will feature hundreds of artists with work for sale, music every afternoon and night, gallery exhibits, special performances, and more.

Opening night, there will be celebrations at galleries throughout the Cutural District (Liberty and Penn Avenues, Downtown) from 4:00 - 8:00 p.m. including pretty amazing art exhibits that will be on view just for the Festival!

To take it all in, I recommend the following schedule for Day 1: Start early in the Artists Market in Gateway Plaza and Point State Park to get first dibs on what the artists bring. (Note -Artists' booths open at noon.) Then at 4pm, treat the evening as you would a gallery crawl in the Cultural District to see all the special exhibits and some special performances. Have a drink and enjoy a little music at Katz Plaza between gallery stops. Then, head down to Point State Park to have your once-a-year funnel cake while enjoying the concert in the park that night!

Visit the arts festival's web site for a complete listing of events! http://www.artsfestival.net/
Posted by Sonja at 9:34 AM 3 comments:

John Metzler was both an inspiring artist and an inspiring person. He was the founder of Urban Tree Forge, President of the Pittsburgh Society of Sculptors, and an incredibly gifted sculptor. He was a friend to many artists and a leader in Pittsburgh's creative community. He found inspiration in trees, and loved sharing his passion with others.

The Pittsburgh Art Blog features a very touching tribute to John with images contributed by his friends and loved ones.
http://pittsburghgalleries.blogspot.com/2010/05/in-memory-of-pittsburgh-artist-john.html

John was an inspiring force in Pittsburgh's artistic community, and I am grateful to have worked with him on several different projects over the past five months. I enjoyed working with him very much because of his kindness, humor, and gentle spirit. He was a truly wonderful individual -enthusiastic, humble, hard-working, creative, and always positive and friendly. I feel so sad for his friends, family and those who loved him, but I know his memory will live on. He leaves a legacy through his example and through his beautiful work.
Posted by Sonja at 8:41 AM 1 comment:

some discoveries of beautiful books: 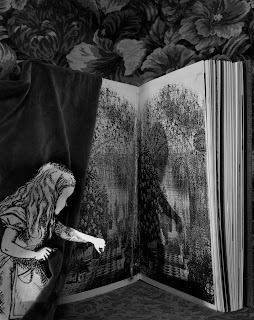 Abelardo Morell, The loveliest garden you ever saw, 1998, printed later (above)

From Betty Boop to James Joyce, Salvador Dali and Tim Burton, Lewis Carroll’s Wonderland novels have inspired more than a century of literature, music, film, fashion, art, photography and much more. Renowned photographer Abelardo Morell has reimagined Alice in Wonderland by combining cutouts of Sir John Tenniel's classic illustrations for the book’s original edition in 1865, with his own ingenious photographs that comment cleverly on the text. Morell’s work brims with a wit, delight and imagination that Carroll himself, a pioneer photographer, would have relished.

Organized by the Silver Eye Center for Photography; Presented by the Three Rivers Arts Festival and The Pittsburgh Cultural Trust Department of Education and Community Engagement